Beyond Circumstances by Gloria Joynt-Lang

Series: Out of the Darkness 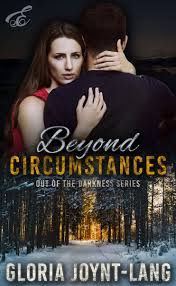 Dr. Lexie Draden didn’t want to leave her successful career as a surgeon in Chicago, but she didn’t have a choice. Her family needed to heal, and as long as she was around, it wasn’t going to happen. While adapting to her new community, she meets Zak Tifour, a man as intriguing as he is handsome.

Most of the small-town residents view Zak as a man who likes his privacy, but to a select few, something doesn’t seem right. Long-time resident Cicily McQuay believes she has the key to the man’s odd behavior – a link to terrorism. After all, he just isn’t the type of man who belongs in her community. But to belong, you need to be welcomed; something Cicily has never extended to Zak.

Zak knows plenty of terrorists and has even lived amongst them, but not like Cicily suspects. Escaping from a lifetime of bloodshed and regrets, he attempts to distance himself from the quirky townsfolk; people unable to comprehend boundaries. It appears to be working until he encounters the town’s new attractive doctor. Even though his secrets run deep, she ends up trusting him with her heart. But trust is fragile, and when Zak gets drawn back to his old life, Lexie must decide whether he’s a dangerous man or a broken hero.

Excerpt from Chapter One

She reached into her purse to grab her phone. Hopefully, tow trucks operated on

Saturdays in this rural area.

Crap. The phone was dead. She had meant to charge it, but then forgot. Just calm down, she told herself. Maybe there’s a charger in the glove box. Frantically, she searched. Damn.

At least she had a full tank of gas. She could avoid freezing to death for several hours.

Hours? God no. She couldn’t imagine being stuck in the vehicle for even several more minutes.

Maybe someone would come along. Yes, she was in the countryside, but it wasn’t some remote mountain village in Peru. She was only about an hour and a half from Chicago, and although it wasn’t a highway, it was a paved road. She thought back to how many cars she had passed on the way to town. She cursed, unable to recall any.

She tilted her head back and closed her eyes. No, she wasn’t going to cry. Not because she was strong, but because tears weren’t going to get her car to move back onto the road. She opened her eyes and looked around. It was so hard to see with all the snow swirling around. It was what meteorologists referred to as a ground blizzard. There wasn’t snow falling from the sky. Rather the white stuff was violently twisting up from the ground. The sixty-mile-per-hour winds were creating havoc on visibility. If only the wind could slow down for a second.

Then it happened. There were a few seconds where the wind paused, and Lexie was able to catch a glimpse.

“A driveway,” she exclaimed. She did a quick fist pump in the air. The gravel clearing was only a few yards away. The driveway would lead to a house. She would walk up the snow–covered road and ask to use a phone.

Oh, but what if it was a long driveway, or what if no one was home? Or maybe it was just an entrance to some wheat field with no house or residents.

She slammed her hands on the steering wheel in frustration, making the horn blare.

She stared into the distance as she racked her brain for options. None came to her. Finally, she pulled the hood on her jacket over her head. She would take her chances and trek down the lane. If it looked like it was too far, she would simply return to her car.

She was about to open the door when she saw the outline of someone approaching. Relief washed over her. However, it quickly turned to fright when she saw an ax-wielding, masked man coming toward her.

Quickly, she locked her door. If he was intent on killing her, she wasn’t going to make it easy for him. No, he would have to smash the window and pry her clenched hands off the steering wheel. She would make damn sure he exerted energy while dragging her away. Bludgeoning her to death would be work.

Gloria Joynt-Lang was born in Ars-Laquenexy, France and spent her childhood experiencing the vast landscapes of Canada. A graduate of the University of Alberta with a degree in Criminology, she devoted her career to working in the criminal justice system. She now splits her time living in rural Alberta, Canada as well as Southern California with her husband and their two dogs, a Maltese named YaHoo and Yorkie named Smookie Bijoux. Why the Yorkie has a stripper name shall remain a tight guarded secret. A lifelong nerd, she is most comfortable with a book or laptop close by except when she transforms to cool biker chick, hopping on her motorcycle for a speed limit abiding ride to the nearest bookstore.